The Revolution is not a Virgin 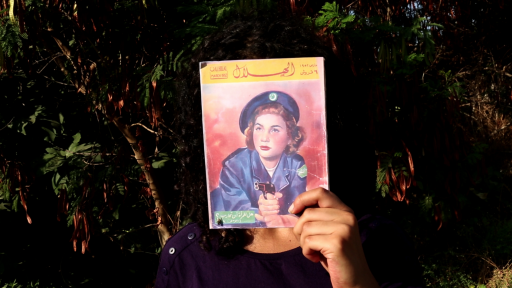 Marwa Arsanios, Have You Ever Killed a Bear? Or Becoming Jamila (Lebanon 2013-14), video still

“Silence is argument carried out by other means.”These words are prevailingly credited to Ernesto ‘Che’ Guevara conjuring multifarious images that may include resistance, defiance, poise. In contrast ‘revolution’ conjures images of chaos, urgency. The revolution, after all, is messy, noisy; it can be didactic and wordy. In some ways, a revolution-proper has no other recourse but to follow the dictum of amplification: maximum visibility and increased circulation. Silence, as resistance carried out by other means, in contrast, rests upon another principal. It can, amongst other things, be against (vocal) expansion. And yet it’s a scream.

The decibels of this silent scream can be measured affectively in the gaps of expression by the artists presented here: in what is not shown; in what is not said. It sits in the punchy, provocative back surge of Have You Ever Killed a Bear? Or Becoming Jamila, Marwa Arsanios’ video commenting playfully on the romanticized figure of the female martyr and the exoticisation of the Arab freedom fighter in the on-going ‘selling’ (image circulation) of war and violence. It is expressed in My Name is Foreigner, Cana Bilir-Meier’s film that resists the spectacle of deadly self-harm. Bilir-Meier instead presents fragments taken from around 350 poems by the late Semra Ertan – a 25-year old Turkish migrant who in 1982 set herself alight in protest of German xenophobia. Rettungsgriffe, an assemblage of 16mm found footage by Nina Kreuzinger may suggest the most accurate metaphor on the prevailingly fraught East/West, North/South relations: the negotiation between the bodies that rescue and those rescued. Meanwhile, In Hell, Sean Bonney’s words fly like bullets describing his wholesomely apocalyptic thoughts on Brexit: consummately “worried but outwardly calm”. In another kind of performance to camera titled What Actually Does the Artist Want, Şener Özmen’s attempts to be heard are drowned by the invasive drone of fighter jets. Hadi Fallahpisheh’s live performance, Truth has Four Legs, delivers humour on a knife’s edge stunning his audience into empathic silence. Performing with man-sized photographic scrolls he calls “restaged documents”, Fallahpisheh narrates an immigrants’ experience, temporarily marooned in Republican heartland during the 2016 US presidential election. – Minou Norouzi

In an introduction and post-screening discussion, filmmaker and programmer Minou Norouzi will discuss the evening’s contributions with Hadi Fallahpisheh and Evan Calder Williams in relation to his forthcoming book A Theory Of Sabotage (Verso) and her current research project Revolutionary Patience: The Ethics of Non-interventionist Documentary Encounters, also included as part of the College Art Association, CAA 107th Annual Conference. 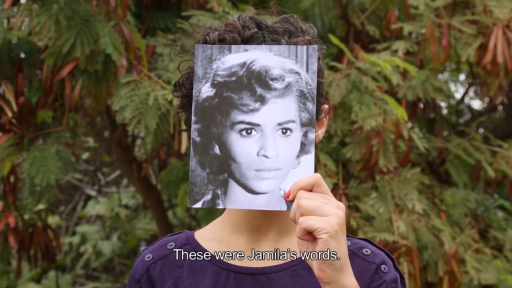 A video that uses the history of a magazine – Cairo’s Al-Hilal ‘50s and ‘60s collection – as the starting point for an inquiry into Jamila Bouhired, the Algerian freedom fighter. An actress designated to play her role is showing the magazine’s covers to the camera. From the different representations of Jamila in cinema to her assimilation and promotion through the magazine, the performance attempts to look at the history of socialist projects in Egypt, anti-colonial wars in Algeria, and the way they have promoted and marginalized feminist projects. The clear gender division used to marginalize women from the public sphere was overcome for a short moment during the Algerian war of independence (Jamila becoming its icon). Different voices and film and print material are used to explore this history. What does it mean to play the role of the freedom fighter? What does it mean to become an icon? Between role playing and political projects, how does the constitution of the subject serve certain political purposes? 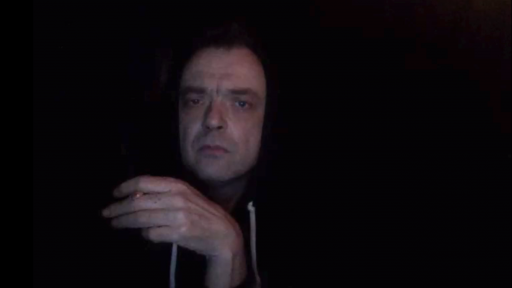 In Hell is a series of spoken-word performances to camera filmed in Sean Bonney’s apartment in Kreuzberg, Berlin by Bonney himself. About the series Bonney says, “The poems are from a sequence titled “Our Death”, which is loosely based on the impressions of a displaced British person watching Brexit from afar, and being troubled by entirely rational apocalyptic visions.” 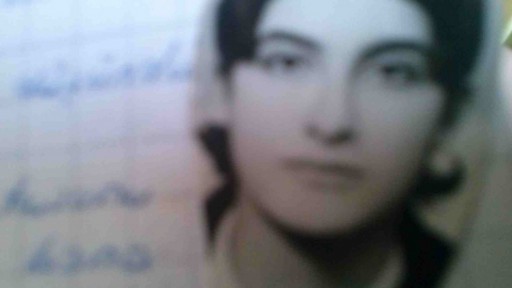 Semra Ertan was born in Turkey, 1956 and moved to her parents to the federal republic of Germany in 1972. She worked as a construction draftswomen as well as an interpreter and wrote over 350 poems. In 1982 Semra Ertan burnt herself in Hamburg to give a sign against racism in Germany. 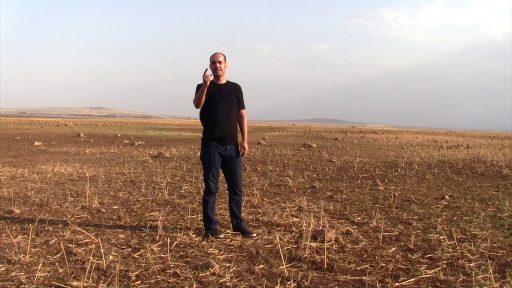 In the video “What Does an Artist Actually Want?”  (2012), Özmen himself is seen standing in a ploughed field, turning to face different cardinal directions, before speaking directly to the camera and gesturing at the ground, then at the viewer and, finally, with arms outstretched, at the empty landscape around him. What he is saying is entirely drowned out by the sound of airplanes taking off and landing. Lip-readers (and wall-label-readers) perhaps understood him to be asking: “Do you think it’s possible for me to influence global art from where I am standing?” Even though we cannot hear him clearly, and he certainly cannot hear us, our collective reply should be a resounding “yes”. – H. G. Masters 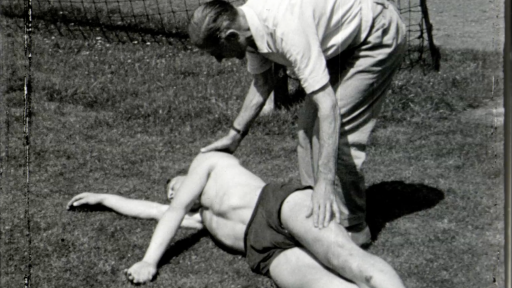 [engl. trans.]: 16 mm, black and white found footage showing rescue grips are severed, slowed down, reassembled and serenaded until a delicate Pas-de-Deux transpires between the one who knows his grip and the other who lays wounded, almost fainting, and lets himselves be led, carried and helped. This film lends comfort. 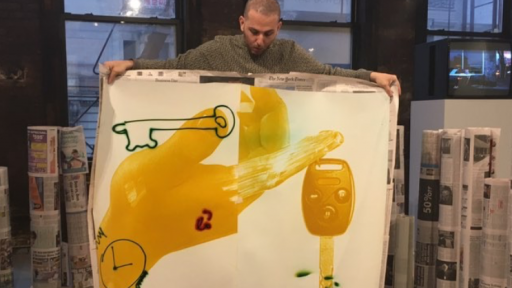 In his performance titled Truth has Four Legs  artist Hadi Fallahpisheh uses large scale scrolls of photo collages to narrate his experience as an immigrant temporarily marooned in the Republican heartland, an area of upstate New York, in the middle of the 2016 US presidential campaign. The details of this story are based on true events and are supported by man sized photographic prints made and performed by Fallahpisheh to heart-warmingly tragic effect. Fallahpisheh calls these prints “restaged documents”. Questioning the ability of representation to convey truths, Fallahpisheh performance invites collective dialogues on desire, resistance, memory and surveillance through the act of storytelling. 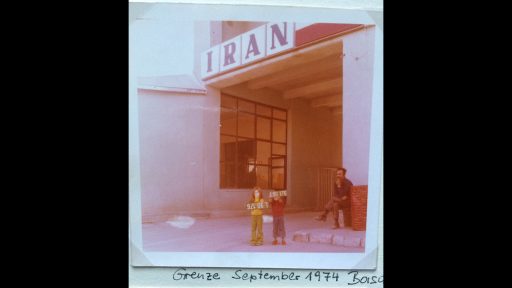 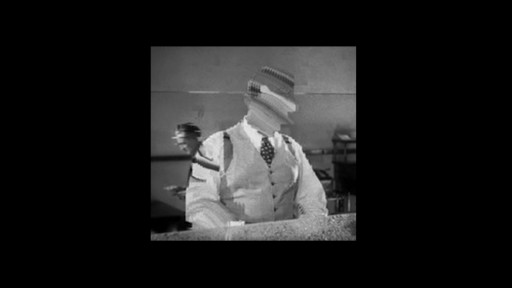 “Sabotage contravenes some of the fundamental suppositions that underpin what has been meant by political, across a wide spectrum. In particular, it cuts against a base insistence on being present. According to those lines of thought, sabotage’s unrepresentable modes of shadowy, deferred, and distributed agency could only ever have been cheating, a petty turbulence with no strategic end. Yet even in its denunciation, sabotage constitutes a key lens onto the last two centuries, revealing the tight metapolitical strictures—i.e. what was allowed to even count as political in the first place—that underwrote even allegedly radical currents and their complicity with long waves of colonization, accumulation, and management. And it’s no accident that the term emerges onto record in late 19th century France, because sabotage doesn’t designate something that humans have done all along, even if forms of invisible resistance have. What sabotage names is specific and internal to capitalism as a lived historical form, able neither to be cheered nor expunged.” (exerpt from Manual Overide by Cader Williams, The New Inquiry, March 21 2016)