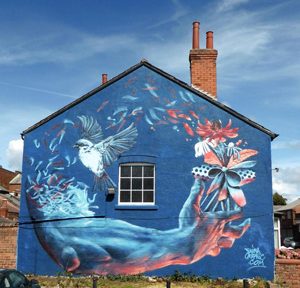 We are a duo of street artists based in Sheffield; our work is inspired by nature and science. Specialising in Graphic design, illustration, and spraypainting, we run our own personal websites and also a commercial website. We work from our studio in Sheffield when working on canvas projects, screenprinting projects, and any other spraywork that needs doing. 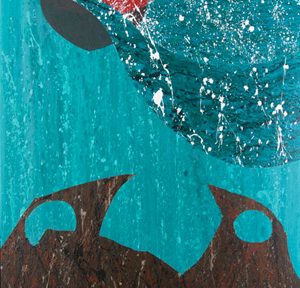 My latest works are a return to narrative, looking backwards and forwards through one’s memory banks in search of those uncanny moments. A return to a textured, tactile practice, a return to colour for colour’s sake, to the very essence of the image within. These new works represent a turn in my artistic practice towards that which gives pleasure, and towards a more vibrant world view. 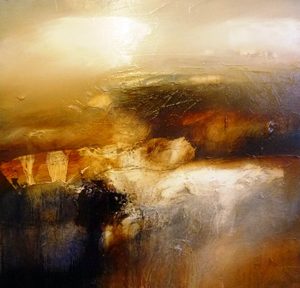 The moorland and grit-stone edges of the Derbyshire Peak District provide the visual stimulus which motivates and informs my paintings. It is interesting to explore how the colour and texture of paint, and the many ways of applying it to create a surface, can relate to the colour and texture of “wild land”. That a defining correspondence of exchange can occur between the physical forms of land and our own “inner landscapes” may be beyond analysis. But it is also beyond doubt. My paintings are an attempt to explore that correspondence of meaning in paint as a contemplative celebration of the vitality and mystery of the “awe-inspiring” in landscape. johnbainbridgeart.com 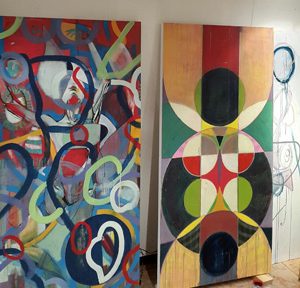 Nick Grindrod is a painter and mark maker working in acrylic and other media. The main theme in his recent work is colour. 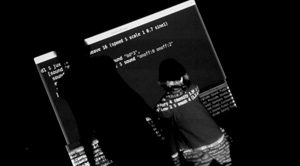 Susanne Palzer is a cross-disciplinary artist, researcher and performer based in Sheffield, UK. Her current practice investigates the intersection of digital and analogue forms, in particular the fusion of digital technology and physical performance. Susanne Palzer is a co-director of Access Space, Sheffield and the curator of the performance events OPENPLATFORM/RAP(s)-TwT. arandomprocessexperiment.blogspot.co.uk
facebook.com/RandomAccessLife 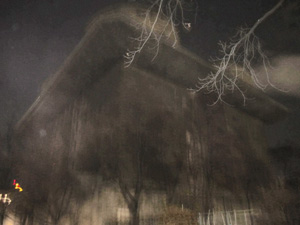 “Memory is not an instrument for exploring the past but its theatre” (A Berlin Chronicle 1932, Walter Benjamin). The way we look at the landscape, the way it is recorded and represented, determines how we understand and internalise it. It defines what we expect to see. Facts are constructed. “A meaningful connection to the past demands, above all, active engagement. It demands imagination and empathy” (Why History Matters, 1997, G. Lerner) stephen-todd.com @artfulstevie 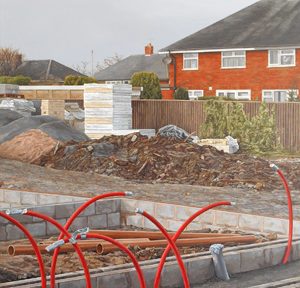 The locations portrayed in my paintings represent the in-between spaces of everyday life. Factual and symbolic, the subject matter often relates to states of being and feeling that can be as unfixed, open to question and awaiting definition as any geographical locale featured… My paintings mimic the medium of photography until the marks of the brush are revealed upon closer inspection. This discovery of intense labour shifts the viewer’s focus from the subject matter depicted to the medium itself. In this respect, the work is as much a comment about the production of art as it is a reflection of contemporary urbanity. swseanwilliams.wordpress.com 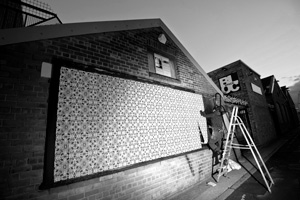 The central theme within my creative practice focuses on the double take, the subtle differentiation between an immersive gaze and a passing glance, where an image becomes an illusion that changes from one thing into another, or disappears completely. Drawn to the affect of film like a painting that comes to life, I’m interested in the aesthetics of early motion pictures from expressionist and surrealist filmmakers. I am particularly interested in the element of surprise that occurs through the process of drawing and developing patterns and animations, drawing on elements of eroticism, humour, and suspense. sarahjanepalmer.co.uk muriel-design.co.uk 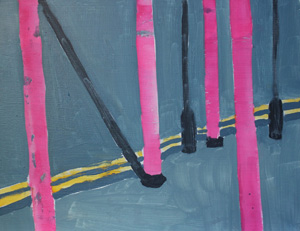 My work is about our interaction with objects, materials and the built environment. I create paintings and assemblages, handling iconic and everyday subject matter with a distinctive irreverence. The works serve as a reminder of the viewer’s physical connection to and separation from the world of materials. I draw inspiration from contemporary visual stimuli – pavements, football fields and rubber gloves – and from images of the Classical past. I read into the stuff of antique lands – teetering columns and crumbling arches – the ruins of Shelley’s colossal wreck. The images I produce are playful reinterpretations of the artefacts of other cultures. I make new structures from the remnants of others, as a way of reconsidering what we belong to, and what belongs to us. helenstokes.net axisweb.org/p/helenstokes 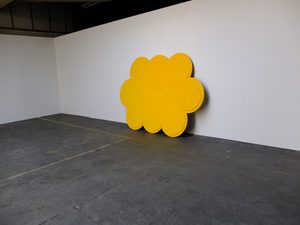 Dominic Mason is an artist based in Sheffield and Scunthorpe in the Yorkshire and Humber region of England. He is co-director of Bloc Projects, Sheffield and exhibitions officer at 20-21 Visual Arts Centre, Scunthorpe. As an artist his work is interdisciplinary, varied and intuitive, often responding to specific spaces or circumstances; an exploration of a universe in which any real answers lay just out of reach. dominicmason.com 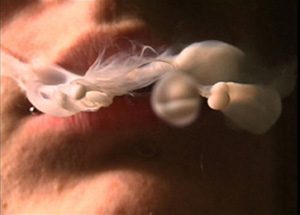 As a multidisciplinary artist I’m open to whichever media the idea needs. Though I consider it all to be a form of drawing. A point of view which liberates mark-making from the page, to be composed of interactions between any surface. And as such it becomes the embodiment of what I describe as the discursive space – the desire to connect through the provenance of shared experience, that state of coming from and returning to which inheres to an object.
janiemoore.co.uk 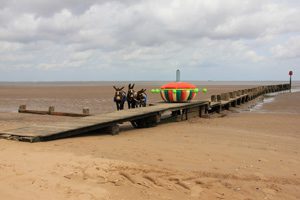 We live in a constant dialogue between memory and our experiences of the present. Kirsty E Smith’s practice draws on a passion for architecture and the optimism of Futurism. As humans we have a fundamental need to make sense of the world and our place in it. Our experiences come into the brain in a vast flow of neural impulses from the eye, the ear, the tongue, skin and so on. Smith’s intention is to create work which resonates on a deeply emotive level and which acts as a vehicle to reconnect with a ‘place’ or memory deep in our subconscious. Frillip Moolog is the name that she has given to such a place. frillipmoolog.co.uk 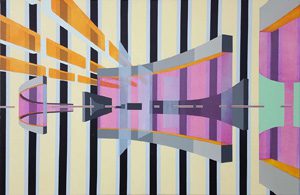 With my recent paintings I have been revisiting the feelings and impressions of living in Arabia during the mid 70’s when I was a child. The strangeness of arriving in a place that was still being built, the surreal expanses of concrete foundations for houses, shops, hospitals etc. that would one day form a town, empty of site workers on days off. I am interested in how as a culture we categorize phenomena and by what criteria we evaluate and label hierarchies of objects and experiences and to what extent our experience of living is covertly prescribed by the incessant “noise” of modern living. davidjonesart.co.uk 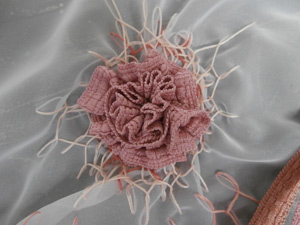 Ulcerative Colitis is part of a series of work exploring representations of illness as objects of beauty. The use of textiles helps to depict the viscera of the body, whilst maintaining a decorative appearance. Through making these pieces, I aim to create an openness through sharing experiences that are sometimes difficult to communicate to others. 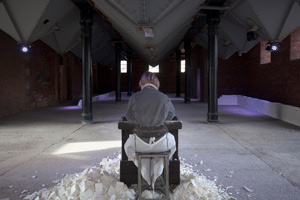 Situated between performance art, sculpture, language, sound and video my projects often respond to a specific place or situation combining one or more of these disciplines. My presence and role as an artist are often crucial throughout the project. This means being in control of process and outcome as well as design of the intervention as a whole. My work is not tied to the direct activation of the viewer, or their literal participation, but there is an overlapping of the social and the aesthetic aspects of the work. silvia-champion.co.uk 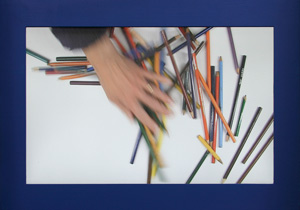 Rachael Hand’s practice is an enquiry into the aesthetic properties of images. Her books, photographs, and films explore relationships between stillness and motion, the ephemeral and the enduring, embodied experience and abstract meaning, the personal and the universal. Hand will be showing Pencil Drawing (2015) a sound and video installation made as part of a recent collaboration with Abigail Hackett and Pete Dodd of the University of Sheffield, studying the movements of children in a playgroup. Housed within a child’s play-table, the piece conjures up the rattle of pencils being flung onto a table-top, on which plays a sequence of images that echoes the complexity and creativity of the children’s actions. rachaelhand.co.uk 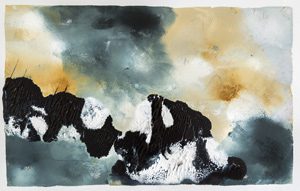 My work plays on the not so straight line between abstraction and narratives, a visual language and dialogue influenced by landscape, nature, emotion and experience. I experiment with lots of techniques and media as I find the practical process vital in exploring how best to create my ideas and concepts. Over the past 10 years photography has become a huge part of my work process. It now exists as a source of research and experience, getting me out exploring different weathers, seasons, the unexpected and the questioning of self. ladoza.co.uk 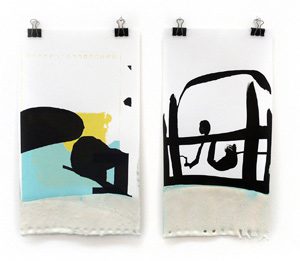 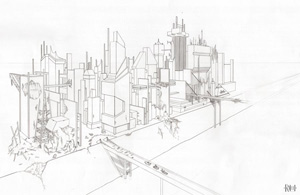 Sheffield born artist David James Riley works as a visual artist, model-maker, and as an acoustic singer-songwriter. His visual work varies across different media, with a focus on shade and texture, which can be seen in his realistic portraits of famous faces from popular culture, music and cinema. Here he uses mostly monochrome pencil, or charcoal and chalk, to capture facial features through line, shade and shape, with the occasional use of watercolour for increased vibrancy. Oil paintings comprise portrayals of sea life with rich and vivid colour. A more personal and abstract approach can be seen in the surreal Cerebral Rain, which shows a greater scope to the artist’s ideas. behance.net/the_riley_man davidjamesriley.com 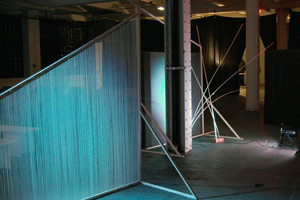 Charlotte A. Morgan works with writing, print, sculpture, photography and performance. Her work draws from the interplay of memory, fiction, narrative and temporality within architectures and interior spaces, and often focuses on the performance of objects and structures and the language of archiving and display. Charlotte is co-founder of COPY, a network and platform for writing in the field of visual art and performance, and collaborates as part of Homeland, an interdisciplinary research and production space exploring myth and utopia. charlotteamorgan.co.uk 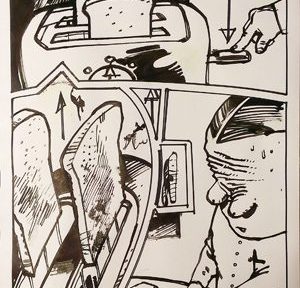 My current projects are focused on drawing. The work is largely figurative and inspired by every-day objects, conversations and occurrences, but will tend to transform these observations into something new. The work is inspired by notions of myth-making, popular culture, signs & symbols, and the use of scale and repetition.