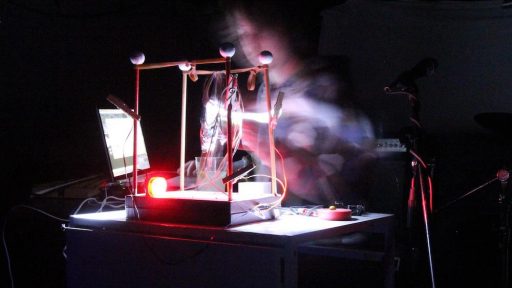 “One of the bourgeoning stars of post-electronica” (The Wire)

John won the 2015 Quartz prize for innovation for his work on the LCI; in 2012 he took this system to Vietnam at the invitation of the British Council, and in 2014 played it to a sold-out Roundhouse in London, supporting Imogen Heap. He has toured extensively and worked with a variety of musicians, poets, and choreographers including: Beck, Thursten Moore, Imogen Heap, Wayne Mcgregor, BBC Symphony and Concert orchestras, Matmos, Grace Jones, Nick Cave, Yo La Tengo, Beth Orton, Talvin Singh, and Otomo Yoshihide. John is also a member of Polar Bear, a twice Mercury Music Prize nominated band based in London. Image courtesy of Blanca Regina.