Born in 1980, Horada graduated from the Visual Arts department of Brown University (2003) and completed her masters’ thesis at the Art and Design department of Yıldız Technical University (2011). Her first solo show Fire Chronicles was presented at Daire Gallery in 2012, followed a year later by a Fall at the same gallery. Her work has also been shown at numerous group shows and international venues including Matadero Madrid (2013); MAK Museum, Vienna (2013), Hannorver Kunstverein (2013), Port İzmir 3 -International Triennial of Contemporary Art, İzmir (2014).

Horada was an artist in residence at Matadero Madrid in 2013, and the Among Other Things residency at Bolu in 2010. She is the recipient of the HSBC Sculpture award in 2007. Sibel Horada currently lives and works in İstanbul. 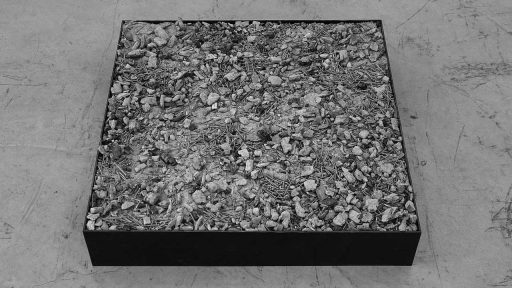 After Smyrne is derived from “Fire Chronicles”, a process and interaction-based work initiated by Sibel Horada at her first solo exhibition in Istanbul (June 2012). It deals with fire as a moment of radical transformation and consists of found objects, burnt objects, images and inkless notes on remembering, forgetting, time, history and identity. Shown here is a site-specific section of the “Fire Chronicles”. The installation includes the few crates which escaped the destruction of the initial structure and begins to resemble a memorial site.