Pat Law studied Drawing and Painting at Edinburgh College of Art and Ecological Sciences at Edinburgh (BA and Bsc). Her work is prompted by observation of the landscape and cultures encountered through sailing voyages or travel – mainly in northern latitudes. Her practice crosses over a range of visual media and forms, usually in collaboration with artists of different disciplines. Recent work stems from journeys around Iceland, and a sailing expedition around Svalbard above the Arctic Circle, shown at Verksmiðjunni á Hjalteyri, a disused herring factory now run by an artists’ collective in the north of Iceland. She shows experimental work in a horse box which she trails around rural areas, and also runs Heriot Toun Studio a multi purpose arts space in the Scottish Borders. 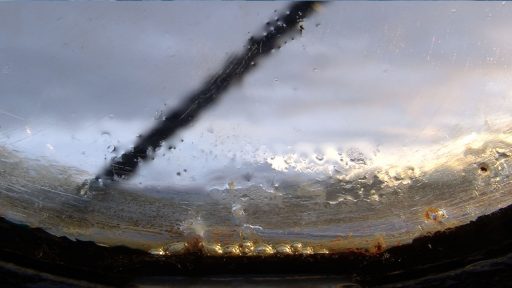 Established as a Russian mining town in 1927 with 1,000 residents, Pyramiden was abandoned in 1998, Russia no longer able to keep it functioning. Families were given a few days to leave – some boarding a ship back to Russia, others, to another mining town in Svalbard, Barentsburg. Filmed out of a cabin porthole when sailing away from Pyramiden, the soundtrack, ‘Red October’, is played by Wes Milholen on a piano which still sits on the stage in the Kultur Huset in Pyramiden.