He is the recipient of Meurice Prize for contemporary art 2013, Audi Talent Awards 2011 and Agnès B. Studio Collector Prize, 2010. 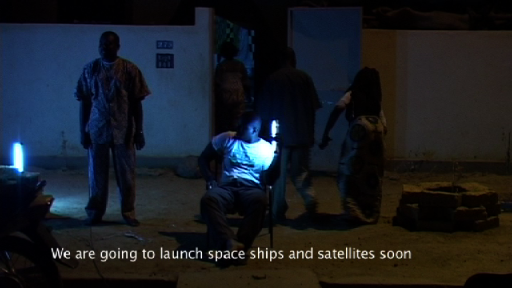 Kempinski is a mystical and animist place. People emerge from the dark, holding fluorescent lamps; they speak about a magical world. “Today we have a space station. We will launch space ships and a few satellites soon that will allow us to have much more information about the other stations and other stars.” Their testimonies spark confusion and contradiction: a second reading is necessary to fully understand what is going on in this unique blend of fiction (sci-fi) and ‘real’ documentary. The scenario of ‘Kempinski’, filmed in various towns in Mali, is defined by specific rules: interviewed people imagine the future and speak about it in the present tense. Their hopeful, poetic and spiritual stories and fantasies are recorded and edited in a melodc way. Image and text courtesy of the artist, and Ghebaly Gallery.