Mike Maryniuk was born in Winnipeg, but raised in the rural back country of Manitoba. A completely self-taught film virtuoso, Maryniuk’s film world is an inventive hybrid of Jim Henson, Norman McLaren and Stan Brakhage. Maryniuk’s films are a visual stew of hand-made ingredients and are full of home cooked wonderfulness.

John Scoles holds an M.A in Canadian Film and English Literature from University of Manitoba and has a diverse collection of artistic pursuits to his credit. He has been the editor of a national music magazine (Roots and Blues SCENE), an opera critic for a major newspaper (Winnipeg Sun), regular contributor to a variety of newspapers and alternative newsweeklies (East Bay Express – Berkeley, CA, UPTOWN – Winnipeg, MB, National Post – Toronto, ON), and is the author of Housecoat Diaries, a retrospective of twenty years of his work. He is the Janitor/President of the Times Changed High & Lonesome Club, an internationally renowned live music venue located in Winnipeg, MB. 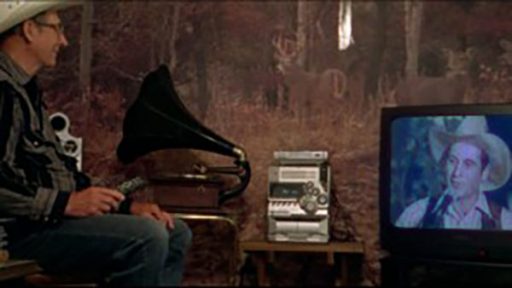 In a wooden folk art universe, a crude internet search takes the viewer on a ride down the information super railroad, exploring the life of Manitoba cowboy yodeling legend Stew Clayton.