Michael Day is a contemporary artist based in Sheffield, UK. His practice is interdisciplinary and uses a wide range of media and technologies, including digital media, sound, installation, electronics and photography. His work is characterised by a visual economy and sense of displaced distance from the viewer, often highlighting moments of transit, stasis, solitude in space, and the passage of time. Previously based in Cardiff, South Wales, he has exhibited and screened work in venues across the UK and in Europe, Mexico, and the USA. He has collaborated with performance artist and NESTA fellow Eddie Ladd on a number of occasions, most recently on the touring show Cof Y Corff, commissioned and premiered at the Linbury Theatre at the Royal Opera House, Covent Garden. He has participated in other collaborative projects with sound artist Neil Webb (UK), and most recently with artist Ipek Yeginsu (Turkey). His curatorial practice began with his participation in the Sheffield-based HAG (Host Artist’s Group), co-developing and producing HAG exhibitions and screening programmes for four years until February 2008. During this time, he worked on HAG projects including Host 4: Cinema, a screening and DVD of short video works; Host 6: Beauty, a print project for the Sheffield Pavilion 2007, premiered at the Venice Biennale and Documenta XII; and Host 8: Observatory for the Art Sheffield 08: Yes / No / Other Options* citywide event. He currently collaborates on curatorial projects under the name Furlough. 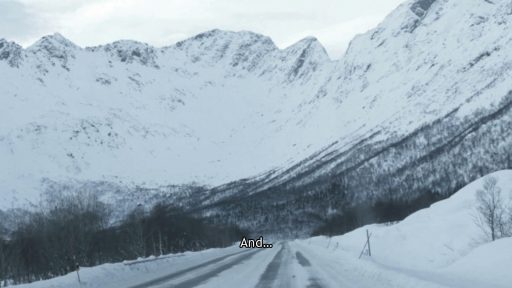 On a car journey across the Lofoten archipelago in Norway, a conversation takes place between the passengers. While the view from the car window reveals vistas of sublime natural beauty at every turn, the conversation turns to an insurance policy that refused to pay out for a laptop that had been damaged while travelling. An uneasy contrast emerges between the spectacular image of the arctic landscape and the intricacies of the insurance claim process. The mundane resignation of the passengers is at odds with their awe-inspiring surroundings.