Louis Henderson (b. Norwich, 1983) is a filmmaker who is trying to find new ways of working with people to address and question our current global condition defined by racist capitalism and ever-present histories of the European colonial project. The working method is archaeological. After several short films, he is currently working on his first feature-length film, a collaborative project based on a critical re-reading of the Haitian revolution, of its great heroes and of the persistence of their heritage in the bodies and minds of the country’s contemporary youth. The film is narrated through a Haitian Creole translation of the play: « Monsieur Toussaint » by Édouard Glissant. Henderson has shown his work at places such as; Rotterdam International Film Festival, Doc Lisboa, CPH:DOX, New York Film Festival, The Contour Biennial, The Kiev Biennial, The Centre Pompidou, SAVVY Contemporary, The Gene Siskell Film Centre, Gasworks and Tate Britain. His work is in the public collection of the Centre National des Arts Plastiques, France and is distributed by Lux (UK) and Video Data Bank (USA). 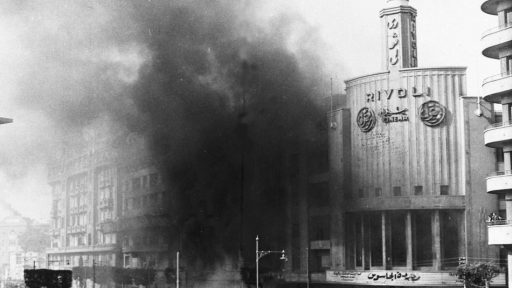 Louis Henderson set out on January 25th in 2012 retracing the path of the Cairo Fire of 1952 – also known as Black Saturday. A single long take of just over nine minutes, recorded from a moving vehicle, takes us on a journey through sections of contemporary Cairo on a bright, sunny day. Set against this we hear Henderson’s gently acquiescent voice reading from Mahmood Hussein’s 1977 book Class Conflict in Egypt, 1945-1970. The people joining in the uprising, we hear, were “made up of the dispossessed masses, joined by groups of workers and members of the petty bourgeoisie”. Their target: the domain, and the symbols of imperialism. Henderson’s The Day Before the Firesemanates a sense of calm whilst assuming the character of a threat. The threat resides in the knowledge of a ‘catastrophe’ that we know happened, but here it never arrives into view. The film traces the line between past and present with a haunting, almost musical cacophony of ambulance and police sirens recorded by Abdulrahmen Mahmoud Korany at Tahrir Square on January 25th 2011 – the advent of Egypt’s Arab Spring.- M. Norouzi