Jobina is a contemporary composer and artist, her work encompasses a wide variety of analogue, digital, lofi and high-end techniques throughout her practice.

Tinnemans has been working in sound from 1997 as musician, composer, sound artist and moved on to all facets of sound production since 2002, as singer/songwriter/producer electronic with her indie pop music BLATNOVA. Her sonic comic “DR.NAUT” was selected for the ISCM World New Music Festival and broadcast by ABC Radio. She has been producing independently for BBC Radio since 2010.

Jobina has worked with some of the most highly regarded innovators and institutions across music, radio and research practices;  she was invited to join former employees from The BBC Radiophonic Workshop together with a group of contemporary musicians and producers to curate a new exhibition celebrating the work of electronic music pioneer Daphne Oram at the Science Museum in London. ‘Oramics to Electronica: Revealing Histories of Electronic Music’ runs until June 2014. 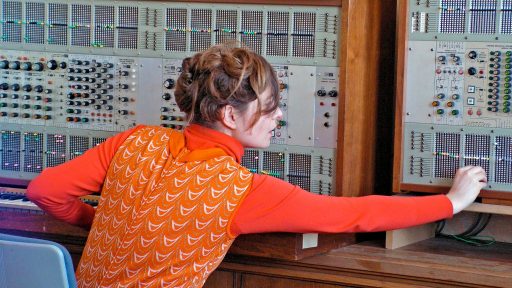 “I often include non musicians to be part of my ensemble, who, by their activity, create a rhythm or sound secondary to their action, for the particular timing it generates. I currently live in Pembrokeshire and for this work I approached its majestic coastal soundscape as an education in timing of my music. In order to keep the timing of a field recording alive and natural – since it’s a document, much like a photograph is – I dissected the recording of a flock of arctic terns into single calls and turned them into a software instrument to be live reconstructed again, back into a flock of birds, at the MATA concert in New York. The sound segments needed to be triggered in a nonlinear way and I used 5 knitters knitting with prepared knitting needles to act as a cloud-like sequencing sampler. Which resulted in the electronics part of the piece being conducted. Performed by members of an ensemble consisting of both conventional instruments and knitters. Similar to a conventional instrument, the audience witnessed a physical presence of an electronic sound by its performer.” -JT