Jasmina Cibic (b. Ljubljana 1979) works in performance, installation and film, employing a range of activity, media and theatrical tactics to redefine or reconsider a specific ideological formation and its framing devices such as art and architecture. Her work draws a parallel between the construction of national culture and its use value for political aims, encouraging the viewer to consider the timelessness of psychological and soft power mechanisms that authoritarian structures utilise in their own reinsertion and reinvention.

Jasmina represented Slovenia at the 55th Venice Biennial with her project “For Our Economy and Culture”. 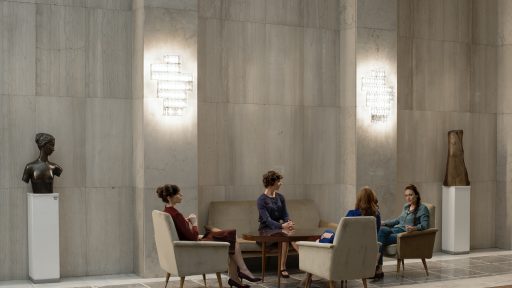 Composed of various quotes – belonging to political speeches that emphasize the iconoclasm of art and architecture – the film creates an original conversation between four characters. A Nation Builder, a Pragmatist, a Conservationist and an Artist/Architect become a reflection of ideological deliberation facing a practical scruple. Including words drawn from Reagan’s speech on the Berlin Wall, Prince Charles’ 1984 address at RIBA and Isis bloggers’ proclamation on the demolition of temples, Tear Down and Rebuild uses rhetoric that endorses demolition as a necessary process to aid the creation of new displays for ensuing nation-states or ideological positions.