Andrews records his ongoing struggle with conventional aspirations. Encouraging temporal distance to distort context, he converts documentary material into wryly understated works with traces of performance, fiction and familiarity. Born in 1980 in Carmathen, Wales, he produces text, photo, video, sound and object based artworks. In 2010 he completed a Fine Art degree at Leeds Metropolitan University. Recent group exhibitions include, The Autobiography of a Super-Tramp at g39, Cardiff, Two Sides of the Same Coin at The Russian Frost Farmers, Wellington, New Zealand, two score at Chapter, Cardiff and An Exchange with Sol LeWitt at The Massachusetts Museum of Contemporary Art, USA. Recent solo exhibitions include, In Soviet Times My Friends Had Teams Like Barcelona, I Had Wrexham at The Last Gallery, Llangadog and Bide Your Time at Elysium Gallery, Swansea. 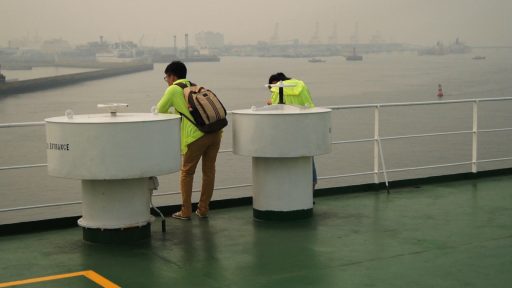 Audio track recorded live from a ferry cabin’s radio, a single take concluding with a separate sea recording. Visuals open to green algae in China, continue with a migrant couple’s journey (artist included) and close with woman divers in Korea. Combined with the rumbling ferry and variation of broadcasts, plus a mixture of optimistic and impassive visuals, the video feels like it should build to a point but it simply captures a journey.