Halil Altındere (born in 1971 in Mardin, lives in Istanbul) is a contemporary artist focusing on the resistance to repressive structures and marginalization within official systems of representation, such as humorously manipulating state documents and official insignia such as flags, passports and banknotes. His later work explores the everyday life and the humorous codes of subcultures in Istanbul. He showed in major international exhibitions including dOCUMENTA 12 (2007), Manifesta 4 (2002), Kwangju Biennial (2002), Sao Paulo Biennial (1998), Istanbul Biennial (2005 and 1997). 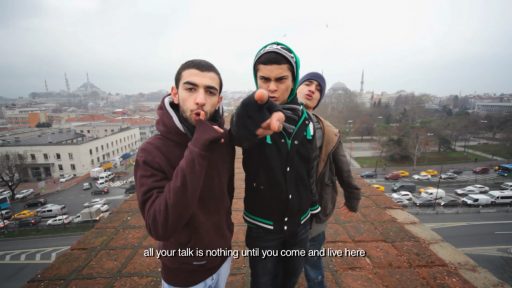 Wonderland by Halil Altindere is filmed in several neighbourhoods where buildings are being left to ruin and communities are destroyed to enable new development. Creating a pseudo music-style video Altindere directs a group of young men as they rap about issues of gentrification and enforced relocation of inhabitants.