Erin Newell is an artist living and working in London. Her work encompasses video and mixed media in installations, and web-based projects that expand into a physical space. There is a sense that the work is the aftermath. Or that it exists in an inbetween space scrutinizing her personal experience against an external perspective. It can draw you in and push you away at the same time. Newell has recently completed two new commissions, an interactive installation occupying a virtual and a physical presence for the National Media Museum’s Open Source exhibition, and a non-linear narrative web-based project for Art at the Centre. Erin graduated from the Royal College of Art in 2010. 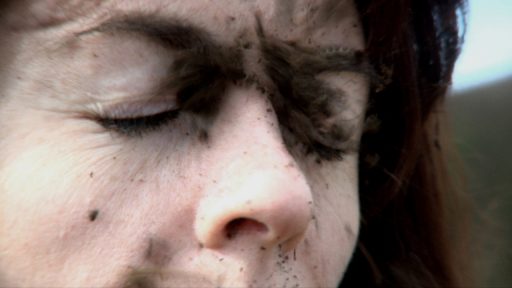 Getting smacked in the face with dirt – a literal and symbolic action – in both senses the land is blinding. This film is a montage of: family footage, political speech, travel, a scene from an old movie; a mixture of documentary, recollection and fiction, which forms a sense of what it means to belong to some place, to have a homeland.