Irish-born artist Duncan Campbell is interested in the seductive power of stories. With a nod to Samuel Beckett’s humour, his work juxtaposes the inherent promise of storytelling with the breakdown of narrative and the inevitable disintegration of meaning. Campbell’s artistic production spans across several media. He is known for setting up the artist-run radio station ‘Radio Tuesday’ and his knitted versions of nightclub posters. His films include ‘Falls Burns Malone Fiddles’ (2003) and ‘o Joan, no…’ (2006), Make it New John (2009) and Arbeit (2011).

In 2008 Campbell was the recipient of the Baloise Art Prize and a Paul Hamlyn Foundation Award. Recent solo exhibitions include Tramway, Glasgow (2010); Chisenhale, London; Kunstverein München; Museum Moderner Kunst, Vienna and The Scottish National Gallery of Modern Art (all 2009). Duncan Campbell completed the MFA at Glasgow School of Art in 1998. He lives and works in Glasgow and is represented by HOTEL, London. 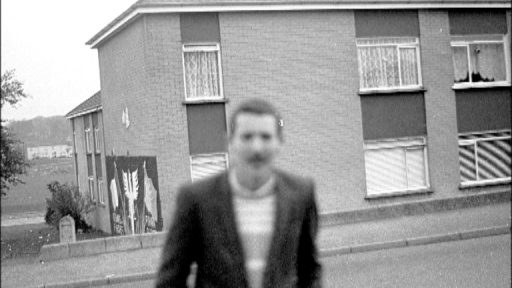 “Duncan Campbell’s film Falls Burns Malone Fiddles draws out the processes whereby people do nothing and something happens. It is a sort of aestheticisation of everyday existence visible in the hairstyles, the fashions and aspirations of the moment. This style of documentary film with an off screen voice-over combined with still images and bootlegged sources brings to mind the work of John T Davis and Chris Marker. Duncan’s work is built up from Belfast community photographic archives and partakes in and comments on the DIY aesthetic that comes with these sources.” – Mike Kelly