Charlotte Ginsborg is a London based filmmaker. She graduated with an MA in Fine Art from Goldsmiths College in 2002. Her films interweave documentary and fictional elements to explore people’s psychological relationship to their jobs and working architectural environments. Her 16mm films and videos have been screened and exhibited nationally and internationally including: the Serpentine Gallery, ICA, and Camden Arts Centre, London, the Walker Institute, Minneapolis, Haus der Kulturen der Welt, Berlin and Palais de Tokyo, Paris. She has had recent solo exhibitions at the Jerwood Foundation, London, and Basis, Frankfurt. Her film, ‘Over The Bones’ was nominated for the Tiger Shorts Competition at the Rotterdam Film Festival 2010. Her films have been commissioned and funded by Film London, the Arts Council England and the Jerwood Foundation and are distributed by The LUX. She received a FLAMIN Production Award in 2010 to produce her most recent film Over The bones which Premiered at the Belfast Film Festival in 2012. 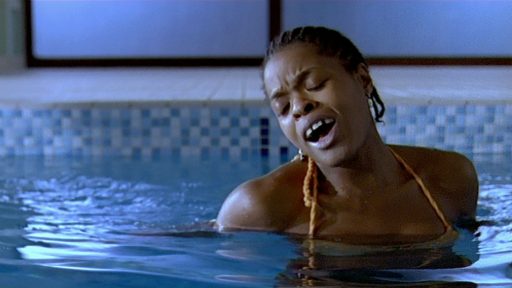 Following the structure of a road movie, Over The Bones is a visual essay fusing documentary and fiction to detail the meeting of two intentionally incongruous characters, a singer and a lorry driver. The narrative is revealed through voice over, interviews and musical performance. Witnessed in their separate working environments the characters’ stories slowly converge until they meet through an accident in a swimming pool that has surreal consequences for both. (Commissioned & funded by the Jerwood Foundation & Arts Council England)