Bruno Ramos was born in 1975 in Lisbon, Portugal. He studied Film at the National School of Theater and Cinema and Critical Art Studies at Maumaus School of Visual Arts, in Lisbon, graduating in 2011 with distinction from Goldsmiths College, in London, with a Masters degree in documentary filmmaking. Working with photography, video and installation has exhibited in the UK and abroad. In 2006 Bruno Ramos won the BES Revelação award in Portugal. In 2010 he was awarded the Gulbenkian Foundation development grant. Ramos currently works and lives in London. 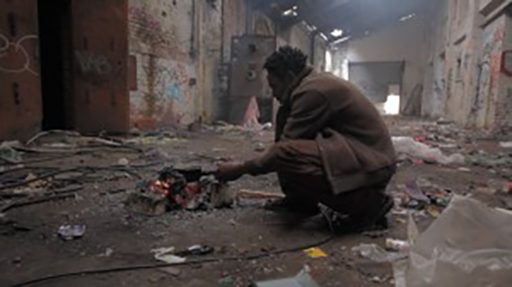 In London’s City centre P. Sylva leads an unusual life. He is a ghost in one of the busiest cities in the world and he stands by his way of life. Factory explores the relationship between a person and the space he inhabits, through a set of predetermined movements. The film was created based on a preset audiovisual narrative and anchored in the character’s everyday life.