Annika Eriksson is a pioneer of the early 1990s artistic tendency to put real situations and social interaction into the center of project-oriented and performative art.  Eriksson was born in Malmö in Sweden in 1956. In 2002/03 she was a guest of the Berliner Künstlerprogramm/ DAAD. Eriksson has realized numerous projects and commissions in public space including at Arnolfini, Bristol (2009), for UP Projects in Regent’s Park, London (2008), for Mobile Art Productions and Tensta Konsthall, Stockholm (2008), for Platform Garanti, Istanbul (2007), for IASPIS for the Biennial in Venice in 2005 and for the Dakar Biennial (2008). Eriksson has participated in numerous international group shows, recently in “Schazam” at GerhardsenGerner, Berlin (2010), “Code Share” at CAC Vilnius (2009), “The Greenroom” at Bard College, New York (2008) and in the Sheffield Biennale 2008. 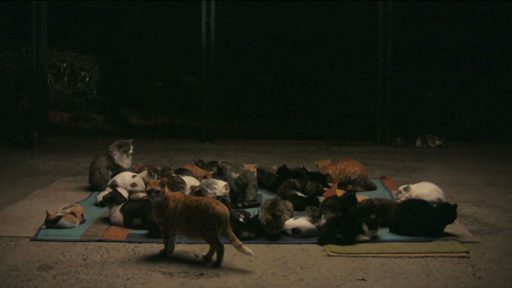 The Great Good Place portrays a community of formerly well cared for domesticated cats that have since been abandoned and now live together in a park in Istanbul. The notion of place hinted at in the title refers to the non-defined spaces within a cityscape that temporarily allow for informal living-conditions to exist.