“Anne was born in the Valley of the Jolly Green Giant, and has lived in San Francisco since 1990. In Fall 2004, she relocated to Busan, South Korea, where she taught video art at KyungSung University for eighteen months. Prior to this she taught at the San Francisco Art Institute, University of California Santa Cruz, and Stanford University. Anne started making videos in the late 1980’s while a student. Her single channel works are much in the tradition of personal/poetical performance to camera, playing off of the conventions of television. She has explored the personal through formal narrative, particularly in Strain Andromeda, The, her 1993 end-to-beginning re-edit of Robert Wise’s The Andromeda Strain. Strain was her first foray into disaster deconstruction. In 2006 Anne completed Adventure Poseidon, The (The Unsinking of my Ship), which celebrates the 20-year anniversary of her very own real-life shipwreck experience. She also writes poems and sings them as songs, and has performed as Freddy McGuire with San Francisco-based electronic musician Wobbly, live and on radio.” – Video Data Bank 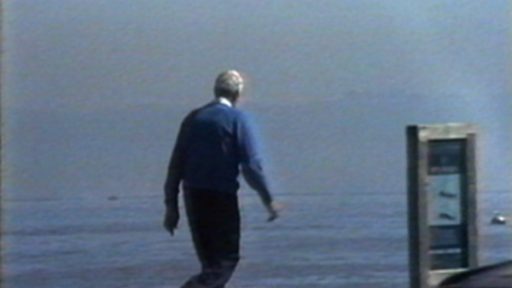 Joe DiMaggio 1, 2, 3 is a video in three parts about a chance encounter. The artist stalks and serenades Joe DiMaggio in her car as he strolls the docks unaware that she is videotaping his every step. Sitting in her parked car in San Francisco’s Marina, McGuire’s camera was running when elderly baseball legend Joe DiMaggio unexpectedly walked into the shot. In the tape, she follows him, continuing to shoot while beginning to make up songs about her feelings for him as she drives. The audio has been processed to the point where it’s impossible to identify its source. McGuire abandons singing altogether and begins to plead, her electronically processed voice sounding desperate and predatory. 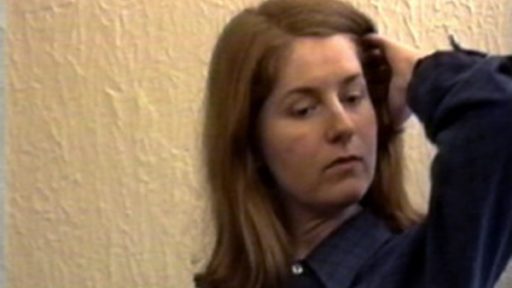 “The Telling shows McGuire telling two acquaintances a secret about her past using a three-camera set-up in the Desi Arnez style. That intimacy is commodified is not the strangest thing about this work. The fractured editing, silences and lapses in continuity imply vast narratives far more evocative than anything revealed on screen. McGuire uses television vernacular to open up ambiguity and discomfort, two things which televisions strives to elude at all costs.” – Nelson Henricks 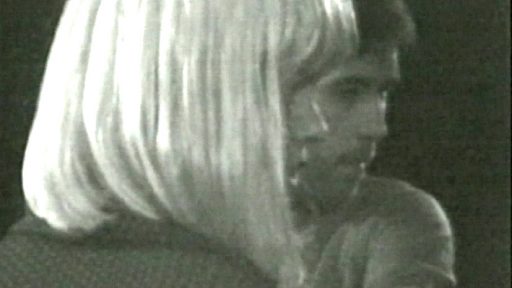 All Smiles And Sadness is like a very short TV show. Nothing is resolved and it leaves the viewer wishing it would go on forever. “McGuire constructs a murky black and white soap-opera world of endless, timeless, and placeless limbo, where the characters talk to each other entirely in cliches, bad poetry, and culminates in an absolutely stunning monologue performance by legendary underground film and videomaker George Kuchar.” – Video Data Bank